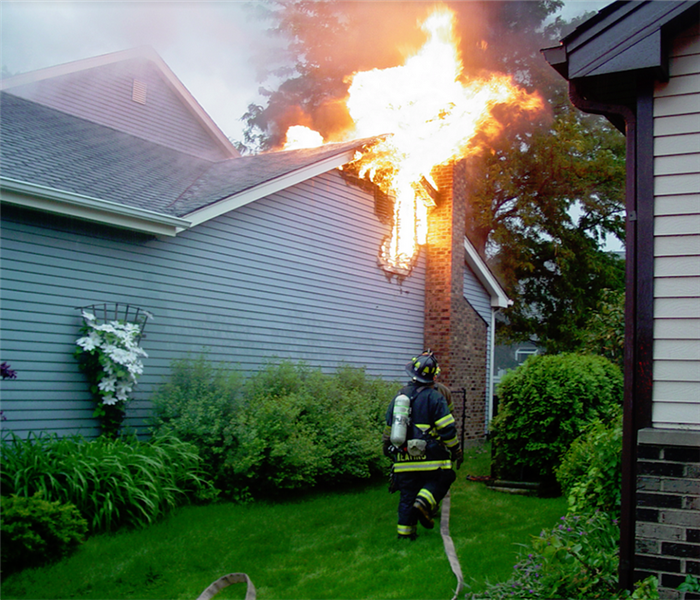 Did a recent fire in your home include smoke and bad odors? Team SERVPRO technicians specialize in dealing with fire damage situations.

Professional Remediation Experts Need to be Involved After Any Fire, Regardless of the Size

Out-of-control forest fires remain one of the worst ways a home can catch on fire, but it is not the only way. Homes in Montrose can catch on fire in many ways, including malfunctioning appliances, such as dryers with a buildup of lint and debris in the duct. Clogged dryers can become heated hot enough that they ignite.

Montrose homes risk fire damage when dryer maintenance happens on less than a regular basis. Cleaning out the lint catcher each time clothing is removed from the dryer helps, but often it is not enough. Fine lint can still escape and find its way to the exhaust vent cover. Also, because lint is often still damp when it escapes the lint trap, adhering to the inside of the duct happens all too easily. Any lint, fibers, threads, and paper bits that end up lost accumulate in a snowball effect, rapidly increasing in size.

Synthetic fibers in clothing often melt at high temperatures before it ignites. Dryer-related fires can leave your laundry area a horrible mess, with jumbles of melted, hard articles of clothing mixed with others, now singed and charred black. Your folding area and the inside of your dryer can sustain ugly damage from your once fashionable clothing. The smoke produced by clothing often burns black and easily adheres to the surfaces it touches.

Our highly experienced technicians can help eliminate the damage caused by dryer fires. Even when plastic-based materials strongly bond to hard surfaces such as tabletops and the interior of dryers after melting, we can remove this melted-on material. Using your dryer without removing all of the melted-on plastics can ruin future loads of clothing. One of the goals at SERVPRO  is to prevent damage from harming your home or the contents inside. A dryer-related fire might seem small, but the ramifications for you and your family's appearance can be long-lasting and costly if mismanaged.

SERVPRO of Montrose / Telluride can be contacted at (970) 240-6970 every day of the week and at any hour. Whenever you have fire damage of any kind, call us for friendly, professional service. We're Faster To Any Size Disaster.